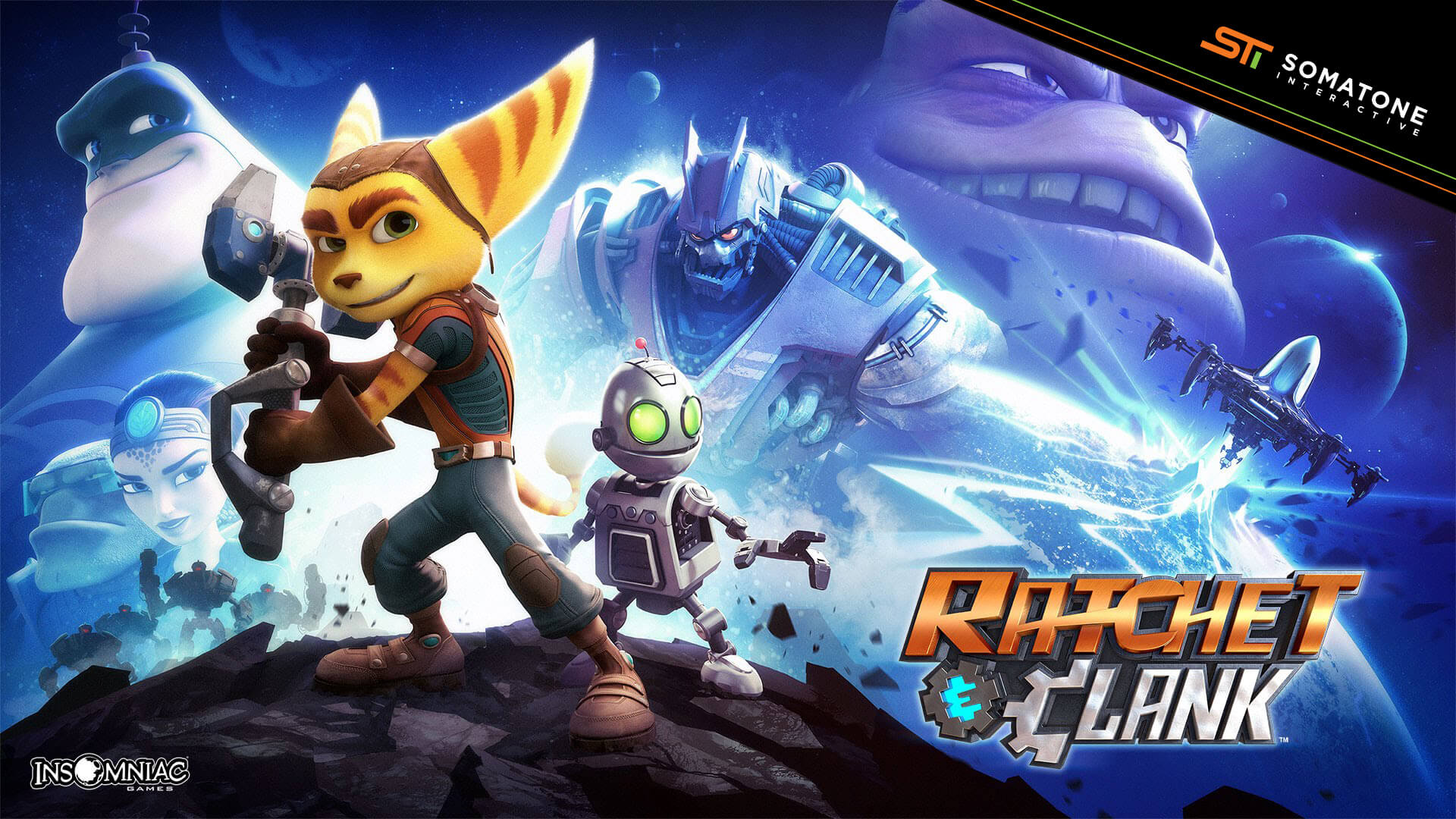 The Audio Development of Ratchet & Clank

Somatone is very proud to have partnered with Insomniac Games on their latest blockbuster release, Ratchet & Clank for PS4. We composed the in-game score, as well as the Music, Sound Design, and 5.1 mixing on over 1-hour of cutscene footage.

Since the game has been so well received, receiving a 9.0 score on IGN and 86 on Metacritic, we wanted to take a moment to chat with a few of the key creative contributors behind the audio in this game. If you’re a fan of game soundtracks, read on to hear what the Somatone composers and sound designers have to say about the creation of the Ratchet & Clank PS4 audio experience.

Somatone: John Hoge, as one of Somatone’s principal composers, you contributed to gameplay music. How did you work to maintain consistency of the Ratchet and Clank “sound” for its latest release?

John: I think the Ratchet and Clank “sound,” in terms of music, has changed a bit over the course of the series’ history. The early games had more of a funky, groovy, laid back soundtrack. 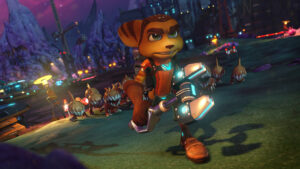 Lead composer Michael Bross, who has worked on the last four games, has taken the music in a different direction. The established “sound” of Ratchet and Clank now is a mix of heroic orchestral fare with many different electronic elements. It isn’t completely dark scifi, but it definitely has a bit more of a serious tone than the music of the early games.

It’s also worth noting that I worked with Bross on the music for a previous Ratchet and Clank game, Full Frontal Assault, and so I already had a bit of experience trying to replicate his style.

Somatone: Mike Winters, you were involved with the Foley work.  Tell us about what you recorded for Clank, since his sound is so special. 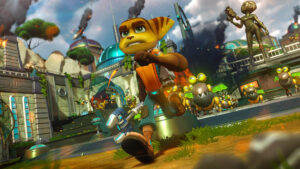 Mike: For Clank, the servo sounds that you hear were provided by Insomniac Games. These are what we called “Signature Sounds” that were already defined for the character, so we primarily edited and mixed those library assets. It was up to us to find the sound for Clank’s body movement with Foley. There were a lot of different things that we tried: multiple tools, like a ratchet of course, screwdrivers, wrenches and even different pieces of junk metal we have in our Foley room. It wasn’t until we messed with the idea of forks and knifes that we found the sound. Kitchen forks and butterknives being controlled with our hands gave us the sound we were looking for.

Somatone: Alex Walker-Smith, as part of the composing team, tell us about your process on the cutscene music?

Alex Walker Smith: The cutscenes are my favorite! I receive a clip with only dialogue and sound effects, and it’s my job to enhance the mood of the scene and emphasize the important parts. Finding the right tempo/pace for each moment is important, and it can change quickly, so it requires a carefully constructed click track.

From there I identify where the music speaks, where the build up is, the shock, humor, payoff, or whatever else I can emphasize, and build a coherent musical complement to sing along with the scene. Intensifying action, dodging dialogue, and keeping a natural flow, it’s a delicate process.

Somatone: John, you were involved in the cut scenes as well as Alex. What was your experience writing for linear media as compared to in-game interactive music? 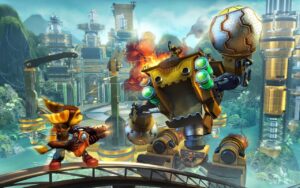 John Hoge: The music for most of the cut scenes differed from the gameplay music in that it was almost entirely orchestral, with hardly any electronic elements at all. The approach was to use an old Hollywood technique known as “Mickey Mousing,” in which every beat or action gets some kind of musical accent. At least, that’s where we started.

Ultimately we had to strike a balance between Mickey Mousing the hell out of it, and letting the music have some breathing room during dialogue sequences, for instance. This was especially true for the NPC cutscenes, which are cutscenes that take place in-game when Ratchet interacts with another character. At first my approach was to continue creating a dynamic underscore, but we quickly decided that for these moments, a more subtle approach worked better. I think that the higher the drama in the scene, the more Mickey Mousing there was involved. For calmer scenes, the music filled more of a support role.

Somatone: Alex, the music on Ratchet & Clank is varied and touches on a wide range of styles and genres.  How did you approach the music for this project, knowing it required such a variety of instrumentation and range emotions?

Alex Walker Smith: This was the first Ratchet & Clank game I had worked on, so I had a bit of studying to do.  I needed to become familiar with the established music themes and instrumentation, and the emotional theme of the game.

Ratchet & Clank requires a careful balance of seriousness and playfulness, and the music helps to maintain that balance.  If it’s too serious, the players may not be smiling enough; too comedic, and the players are rolling their eyes. This game had me writing electronic action cues, “sneaky” spy music, bombastic orchestral scores, silly “cha cha” dances, and even had me performing classical piano with a little Chopin.  Ratchet & Clank was a creative workout!

Somatone: John, for the Aridia map, you did some interesting work with electronic elements in the music cues. Can you tell us about that?

John Hoge: For a number of the Aridia cues, I took a couple different electronic percussion sounds and used a glitch plug-in to make them stutter and reverse in random ways. I had them panned separately, which gave the cues this wide mid-layer of glitchy percussion. I think it turned out pretty well. I also had some EDM-inspired synth pads and leads here and there that I treated with a “pumping” effect, like you often hear in EDM/house music, using a technique called side-chain compression. You can hear those kinds of sounds in a lot of the Kerwan music as well, and throughout the rest of the score that I had a part in writing.

“Somatone Interactive provided us with some quality audio assets for Ratchet and Clank on the PS4. With over an hour of cutscene work that needed to include assets from the feature film and be delivered in eighteen different languages, they managed to meet our tight deadlines while assuring that the work met our standards for the highest quality. They also created and integrated assets directly into our audio tools which streamlined our pipeline and helped us to deliver an outstanding product on time. Thank you Somatone!”

Needless to say, if you haven’t played Ratchet & Clank you need to make this your next distraction. It’s a fantastic game, from a fantastic developer, and we are excited to see what is next for this ever-improving game franchise.